It’s easy to think of playing video games as being a complete waste of time.

After all, if you’re a serious gamer, you’ve probably had nights where you look up at the clock and suddenly realize you’ve blown through hours of a gaming session without even realizing it.

But, what if you could also make money doing something you love?

The good news is that, thanks to game developer Valve, you can now make money on Steam, the largest video game distribution platform for PC.

If you want to learn how to make money on Steam by playing games or offering your services to the marketplace, be sure to read this one until the end! 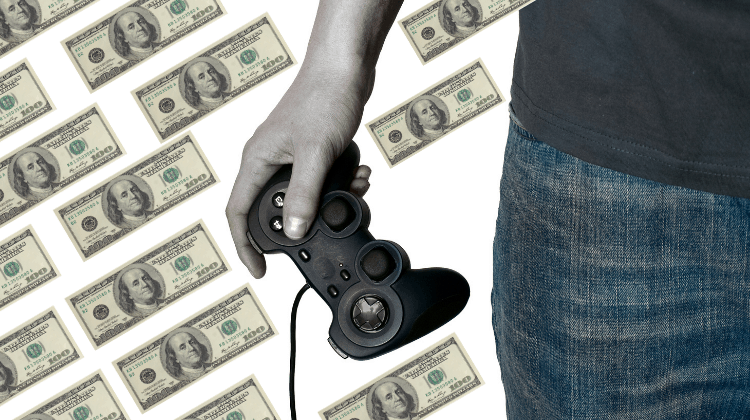 Steam is a video game distribution platform that was created by Valve in 2003.

You might be familiar with Valve since they created iconic PC classics like Portal, Team Fortress 2, and Counter Strike.

Additionally, if you play games, you probably have Steam installed on your computer right now.

Steam has changed dramatically since its inception.

What began as a tool for Valve to update their games has grown into the largest video game distribution platform in the world.

With thousands of games and over 20 million concurrent players at times, Steam is the place to be if you’re a gamer.

Plus, if you get creative, you can also make money on Steam by tapping into this massive audience of game lovers.

The Best Ways To Make Money On Steam

Some methods of making money with Steam involve grinding out games.

Whatever option you choose, just make sure you do your research first and stick with it!

It’s possible to turn Steam into a side hustle, but you’ll need some patience.

One of the fastest ways to earn money from Steam is to sell in-game items you possess on the Steam community market.

Most game developers discourage buying and selling in-game items for cash because they don’t want players to gain an unfair advantage.

However, the Steam Marketplace isn’t a pay-to-win nightmare.

Rather, Steam lets video game companies award players with in-game items like new character models, skins for their weapons and armor, and other cosmetics that have no impact on core gameplay.

Games like Counter Strike are well-known for this, and if you get lucky, you can win skins, decals, and loot crates that contain prizes. 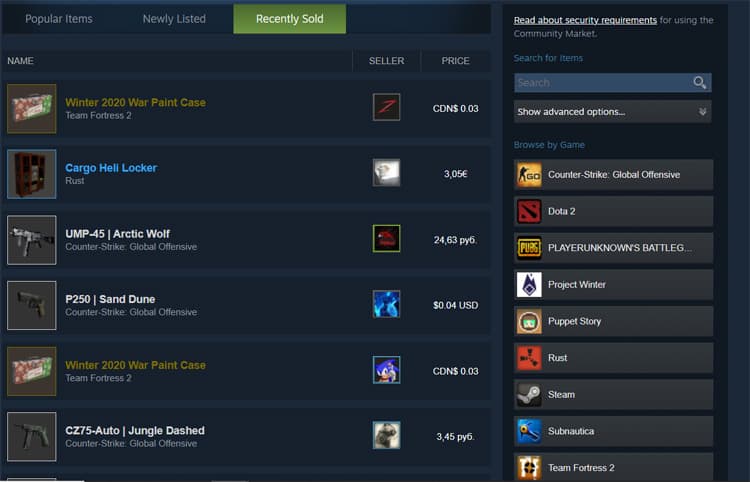 So, if you unlock cosmetics by playing on Steam, you can sell them on the Steam market for real cash.

Many items range from $0.10 to a few dollars. However, rare items can actually fetch thousands or even tens of thousands of dollars.

If you unlock some valuable items, it’s certainly possible to get some money with your Steam account.

If you’ve ever sold baseball or hockey cards, you’ll be familiar with how to make money selling Steam trading cards.

Sets of cards can be transformed into badges or traded for various Steam items. 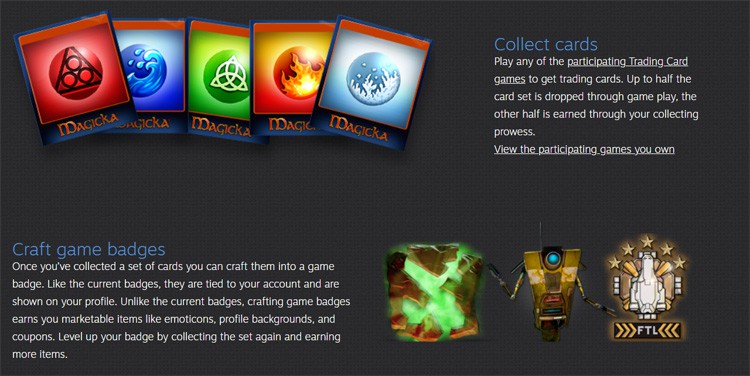 Badges are really a way to show off your in-game achievements and to unlock items and coupons.

However, you can also sell Steam cards on the marketplace for extra cash.

Most cards sell for a few cents, but there are some that sell for a couple of dollars.

And in some cases, some trading cards fetch over $1,000 if they are extremely rare and are foil cards.

Some users rely on Steam card farmer programs to have the opportunity to earn cards more quickly.

Programs like Idle Daddy and Steam Idle Master simulate you playing on your Steam account in the background, so you can passively earn Steam cards.

This is a nifty way to earn extra money, but don’t expect to earn too much unless you get extremely lucky and receive rare cards.

A lot of people want to know how to sell items on Steam fast.

The easiest way I’ve found is to download the Chrome extension Augmented Steam.

With this app installed, you can now sell trading cards fast.

You now have the option to quick sell or instant sell cards.

The quick sell feature lists your card $0.01 less than then lowest listed price in the store.

This will make your card sell first, since it is the lowest priced one.

But it doesn’t mean your card will sell fast.

For that there is the instant sell option.

This feature finds the highest priced buy order on the market and instantly sells your card to that person.

Of course, you could get a lot more money by asking for a higher price, but if your goal is to sell fast, this is the best option.

Another way to make money on Steam is to use apps that pay you free Steam wallet codes.

Your Steam wallet is where you can deposit money into your Steam account, so getting wallet codes is basically like redeeming a free gift card.

If you’re wondering how to get free money on Steam for the sake of saving money on your next game purchase, these apps offer a solution.

Alternatively, you could earn free Steam wallet codes and sell them at a discount price to people you know rather than redeeming them.

Whatever the case, some popular platforms that offer Steam wallet codes include:

None of these options will make you rich.

However, if you already play games, you might as well earn some rewards in the process!

Fiverr is a popular freelance marketplace where business owners can hire freelancers for a variety of tasks.

However, Fiverr also has plenty of niche opportunities.

One of these opportunities is making Steam artwork for gamers to help them spice up their Steam profile. 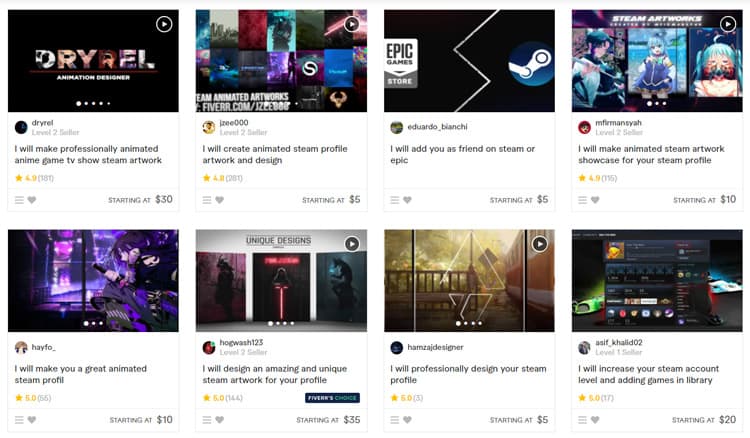 Serious gamers are willing to pay for a custom avatars and profiles artwork.

On Fiverr, several sellers offer this service, with most prices ranging from $10 to $35.

Some sellers even have a few dozen or hundred orders, so there’s money to be made.

If you’re a digital artist and like gaming, this is a natural fit for making money with Steam.

If you know how to program and have game design aspirations, you can set your sights on launching your own Steam game.

Obviously, you need to have some development skills and a concept in mind.

Additionally, there’s a $100 product submission fee and 30-day review period for every submission.

This review period lets Steam ensure that your game functions properly and isn’t doing anything malicious to user’s computers.

If yours is accepted, you have a few options to start making money.

Game sales, downloadable content, and in-game purchases are examples of how you can generate revenue.

Of course, marketing your game and attracting players is the most difficult part aside from creating it.

However, you can learn how to develop better games and promote yourself on social media to grow your player base.

The good news is once you have developed one game, creating additional Steam market games should be easier.

Selling items on Steam’s marketplace is one of the most straightforward ways to exchange your Steam inventory for cash.

However, Steam’s marketplace is sometimes limiting because you can’t sell games or wallet codes.

Thankfully, websites like Gameflip take Steam out of the equation and let you sell almost any video game related item to buyers around the world.

On Gameflip, you can sell:

So, you can theoretically unlock Steam wallet codes or games by using reward apps or Steam trading cards and then resell those items on Gameflip!

Additionally, you can even sell coaching services for specific game titles if you’re a skilled player.

Yes, there are many players who will buy a coaching service to help them improve their play.

If you’re a pro-level gamer, other players can hire you to join their Steam games to help them win matches and boost their rank.

Ultimately, Gameflip is a decent option to sell things that aren’t eligible for sale on Steam’s marketplace.

Just be careful to avoid Gameflip scams when listing things for sale.

According to users on Reddit, scammers can sometimes message you to make it seem like they purchased from you.

However, only Gameflip sends purchase confirmation emails, so keep this in mind.

How Much Money Can You Make On Steam?

Admittedly, it’s difficult to pin down the earning potential for all of these Steam related side hustles.

On the one hand, you could always get rewards for playing, like receiving a rare skin.

For games like Counter Strike, the right skin can be thousands or tens of thousands of dollars. Similarly, rare trading cards can also sell for over $1,000.

However, if we’re being realistic, it’s unlikely you can make enough money with Steam to replace your day job.

If you’re a developer and find success launching your own game on Steam, it’s a different story, but most of these ideas are just a fun side hustle.

Ideally, you should enjoy playing video games and already use Steam if you want to make money on this platform.

If you end up selling a few things on Steam’s marketplace and also use other ideas like reward apps or Fiverr, you can probably make $25 to $100 per month for your efforts.

For most gamers, Steam is just a convenient way to access their favorite games and to play with friends.

If you’re a casual gamer who isn’t interested in starting a new side hustle, there’s nothing wrong with just using Steam for enjoyment.

However, if you get creative and have patience, you can also nurture your gaming habit into a source of extra income.

Hopefully, the next time you sit down to grind out a gaming session, you’re able to play for fun and also make some bonus cash in the process.

If you’re looking for other ways to boost your income, you can also check out these posts:

Tom is a freelance personal finance writer and blogger at This Online World. Tom discovered his interest in personal finance during college, and now helps other young adults learn more about earning and saving more money. In his spare time, Tom enjoys spending time outdoors and creating YouTube videos. His work has been featured in Business Insider, Yahoo Finance, GO Banking Rates, MoneyCrashers, ChooseFI, and more.